What is National Slavery and Human Trafficking Prevention Month? “One hundred and fifty years ago, our Nation codified the fundamental truth that slavery is an affront to human dignity. Still, the bitter fact remains that millions of men, women, and children around the globe, including here at home, are subject to modern-day slavery: the cruel, inhumane practice of human trafficking. This month, we rededicate ourselves to assisting victims of human trafficking and to combating it in all its forms.”
President Barack Obama 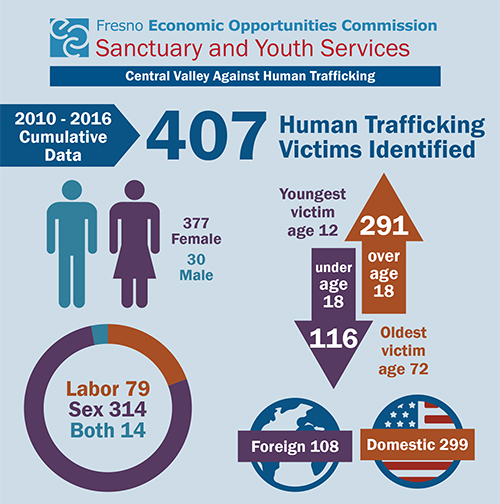 Today there are nearly 21 million victims of forced labor and human trafficking worldwide, a global industry which generates an estimated $32 billion-a-year in illegal profits. Victims include men, women and children. The United States is widely regarded as a destination country for modern day slavery. The U.S. Department of State estimates that 14,500 to 17,500 victims are trafficked into the United States each year, not to mention those that are trafficked within our borders. California– a populous border state with a significant immigrant population and the world’s ninth largest economy – is one of the nation’s top four destination states for the trafficking human beings (State of CA, Office of the Attorney General). Human trafficking exists and is prevalent in our Central Valley. We must fight to end this injustice together!

Since 2010, Fresno EOC’s Central Valley Against Human Trafficking project has identified and assisted over 400 victims of human trafficking from local communities, by providing valuable resources to empower self-sufficiency, restore dignity and support recovery from trauma. We are proud to stand together as the Central Valley Freedom Coalition to raise awareness in honor of National Slavery and Human Trafficking Prevention Month.